Travels of an Angeleno: Four Nights in Ningbo

Ningbo is not an easy city to navigate on public transportation. Getting from the airport to my hotel would have taken over two hours on a train and two buses. Ningbo is a driving town. You can see it at 5 PM each day as the streets are overrun by cars ignoring traffic signals to push their way through to their destinations.

I was on a business trip and had the luxury of a host who picked me up at the airport. I had four nights in Ningbo and would spend each night with a different group of people.

I was in no mood to do much exploring that first day. I walked into my hotel room, dropped my bags on the floor, and crawled into bed. It had been a long, uncomfortable trip that included reclined airplane seats dropped on my knees, a 4-hour layover, and two gate changes. When I awoke a few hours later, I decided it was easier to just have dinner in the hotel restaurant.

The restaurant was buffet style. There were several Asian dishes to choose from but like most hotels, the food was good, not spectacular. Still, I made about three trips to fill up a plate. I had sushi, fried rice, duck, noodles, pork buns, and a few beers to finish the meal.

It’s worth noting that I’ve yet to try a Chinese beer with a serious alcohol level. Even after the beers, I needed a trip to the lobby bar for some rum and peanuts to ensure a good night’s rest.

Work began early the next day. The purpose of this trip was to meet with various product developers. Most vendors typically want to leave a lasting impression of their city and the days tend to end with food, drinks, and fun.

The end of that first work night was at a restaurant that had built a bit of a buzz in a new mall in town (each year I visit, there seems to be a new mall). Traffic to the mall was dreadful so it was pleasant to pull off the street and onto the busy parking lot. We exited the elevator and made our way to the busy restaurant.

Most of the people waiting were large parties so we were able to get seated at a small table right away. The server came by to greet us, serve us water, and instruct us on the ordering system. We were asked to use one of our phones to scan the QR code on the table. This would bring up a menu for us to choose from. Each plate would then be brought out to the table. When finished, we would use the same app to close the bill and pay for the meal. The server would only come by once in a while to refill our water glasses.

This was the first glimpse into how much people do on their phones here in China. Sure, they make calls, text friends, and play games, but they go well beyond those basics. Here, people use WeChat, which is a mixture of our Facebook, Google, and ApplePay all in one government-approved and –backed application. WeChat is used to communicate with the world; search the web; find places; and pay for restaurants, gasoline, parking, trains, and much more.

There we were, at our table ordering with a phone. The place specialized in Hunan cuisine. We knew we’d order their signature dish: a steamed fish head, sliced in half and topped with chopped chili peppers typical of Hunan cooking. 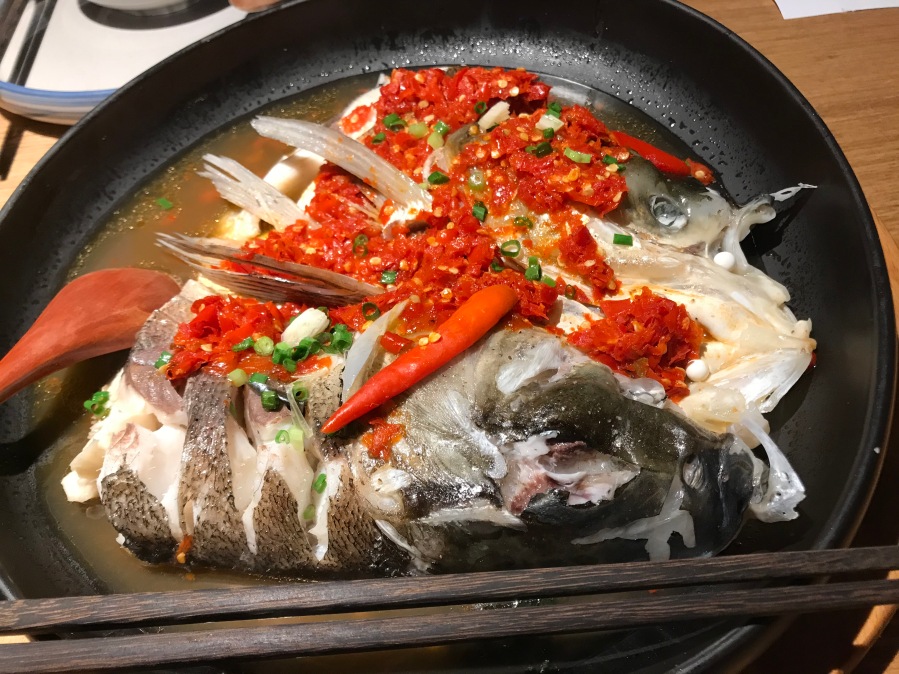 The dishes came out all at once and placed at our table. We snapped a few pictures of the fish head and began to fill our individual bowls from each of the served plates. As advertised, the food was hot. Despite the burn and sweat each bite caused, it was simply too delicious to stop. When the heat became too much, we cooled it down with beer and started the process all over again.

The next night, I found myself in a Korean barbecue restaurant. Four of us sat in a small booth with a grill dug into the center of the table.

While there were plates of seasoned chicken, beef, and pork, the restaurant also included seafood common to Ningbo. We grilled strips of fish, whole shrimp, lobster tails, and scallops on the shell. Each small item possibly made more delectable thanks to the anticipation of seeing it sizzling right at your table. 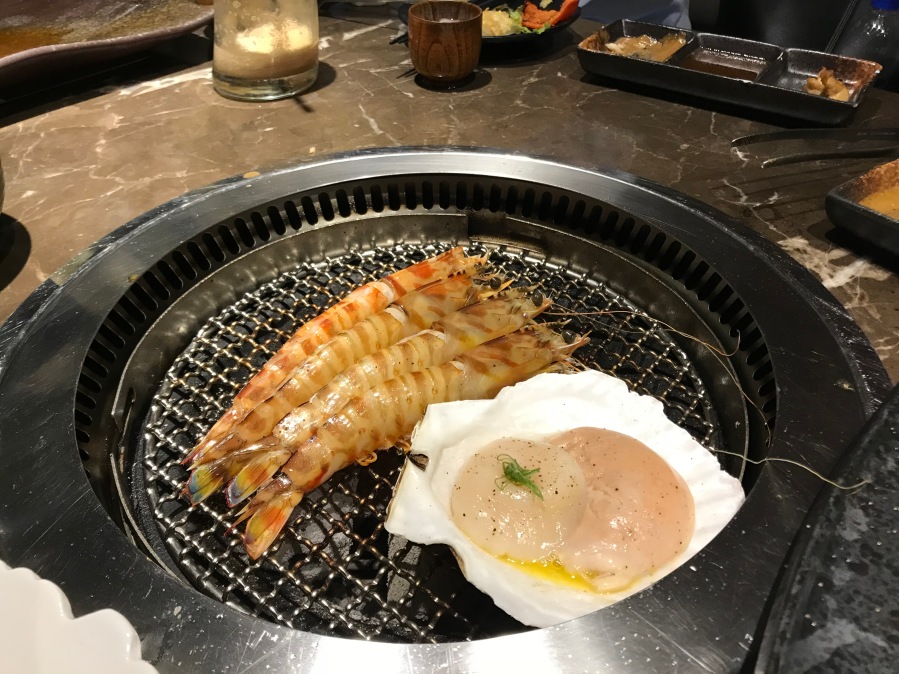 After dinner, we took a quick drive to the center of town. This is where all the debauchery must happen in Ningbo. It’s a square city block consisting of two alleys that run down the center of the square in a cross shape. The alleys are lined with bar after bar with hosts and hostesses enticing you to come inside for some brews. With the World Cup underway, every bar included big-screen televisions, soccer decorations, and employees donned in soccer jerseys of participating countries. China was not in the World Cup and the matches were broadcast live at 2 or 3 in the morning. Even then, the city was captivated by the drama of the World Cup. Bars apparently remained packed through the night and into those morning matches. I, however, did not stick around to confirm if this was actually the case. We opted for a bit of barhopping, music, and taking in the sights of the city center.

Lights of the Ningbo City Center

Night 4: Do as the Locals

There was one final night in Ningbo. My hosts for the evening understood my tastes perhaps better than anybody else that week. That night we ignored the major areas known for fine dining and instead took a drive to one of those neighborhoods locals know how to find. We parked the car in some random parking lot and walked.

We walked past an elementary school, closed and silent by this time in the evening, the kids all at home or probably somewhere along this very street. There were several small storefronts one after the other. All along the block you could buy clothes, electronics, snacks, drinks, or sit down to have a meal. Some of the places were family-run where you’d be greeted by a grandma or by grandpa in a white tee shirt and cigarette in his mouth. Others were high-end shops selling expensive clothes. People walked their purebred Standard Poodles on the same street where strays walked freely looking for scraps that others had dropped on the ground.

We made our way into a tiny place, deceptively no wider than its own doorway. Inside, it somehow opened up like a building in the Harry Potter world. There were fish tanks on one side for you to choose your meal and a few tables on the other end. There was a back room with additional family-style tables already occupied. We found a table on the second floor right next to the stairwell. It was directly in front of a large floor fan—a welcome sight in the brutal humidity—and a small trashcan that would come in handy later that night.

Not speaking the language, I did what I had done every night on the trip, sat quietly while my hosts ordered plenty of food. Plate by plate, each of their selections came out to our table about every 10 minutes.

First came a few freshly prepared vegetable dishes. Then came the main plates. There was again the steamed fish head with chili peppers, this time with an even spicier mix. There was another whole fish served in its own broth, a plate of whole shrimp, and a bowl of cooked clams. We sat delighted in a place where the heat and humidity were multiplied by the confined space and heat of the kitchen below.

The night went on as we picked out shrimp, clams, fish, rice, and vegetables, amid swigs of Tsingtao beer. I thought everything had come out but then came one final, giant plate of bright red crawfish. This is when we took our plates to the small trashcan by the fan and slid the piles of shrimp shells, clam shells, and fish bones inside.

Crawfish require work and patience. The shells are tough and the spices get on your fingers. Rookies tend to learn that second one the hard way when they use their fingers to wipe sweat from their brows. The payoff is the delicious, fiery, soft meat contained inside the carapace of these small creatures.

At the end of the night, each of us had their own mound crawfish shells. The night was over and the most inexpensive meal of the week—prepared by a shirtless man in a sweltering kitchen—had become the most memorable.

Ningbo is a hard Chinese town. Most of the city’s people are in tough manufacturing. They make stuff with steel and plastic here, not OLED screens and circuit boards. One must learn to get past that tough exterior in order to enjoy everything it has to offer.

The days of recording with limited channels and editing on tape. #vintagegear #recording
A few of the murals we came across this morning. #mural #losangeles #streetart
It was a great Father’s Day and this is how I get to close it out. Thanks to all my beautiful girls at home for making it a special day. #girldad #brew #stonebrewing #cheers #happydad
While not completely open, it was good to be able to spend time at Echo Park again after the city shut it down. The Munchkin and her cousin had a blast running around all afternoon. There were paleteros passing through like any other day in a Los Angeles park. The next day, LAPD showed up to harass and kick out vendors. #echoparklake #losangeles
Carne asada, Gentleman Jack, and Pulp Fiction Sunday night because I don’t have to worry about waking up at 4 am on a Monday. #cheers
Take it from Kirby, keep your hands clean. I always found it a little troubling that COVID was the trigger that made many start this habit. #stayhealthy #washyourhands