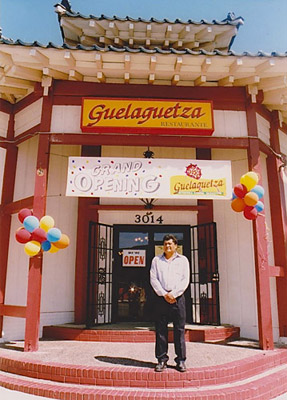 The city of Los Angeles is filled with stories of people who came to L.A. to make their dreams reality—to make some noise. The American Dream may be harder than ever to define and achieve but in a city that welcomes immigrants from all over the world, that dream still exists.

One person who came to Los Angeles in search of that dream is Fernando Lopez. Like so many others, Fernando made the difficult decision of leaving his wife and children behind to come to the United States in search of better opportunities.

He came to Los Angeles in 1993, as the city was undergoing a painful recovery from the riots of the year before. City neighborhoods had been burned to rubble, people were assaulted and killed, and L.A. was considered a dangerous place to live. This was particularly true in the neighborhood of Koreatown, where racial tensions exploded.

Mr. Lopez immediately began to set the groundwork for what would become Guelaguetza. Armed with his beloved Oaxacan recipes, he started to sell food door to door. Los Angeles has always had strong Mexican food choices but most restaurants and street vendors in those days focused on the more commonplace tacos and burritos. In fact, some people thought he should stop working to bring something new to the city and focus on tacos for a faster source of income.

The Oaxacan population in Los Angeles, however, was waiting for someone to bring them a taste of home. Mr. Lopez made enough inroads to open Guelaguetza only one year later on the corner of Olympic Boulevard and Irolo Street. Before long, food lovers of all nationalities and backgrounds flocked to this intersection of Koreatown to sample the recipes Fernando had brought with him to America.

Guelaguetza strikes a balance between Latino and Korean cultures. The architecture is representative of beautiful Korean structures with curved roofs including a pagoda-style top at the front of the restaurant. The white decorative uprights resemble columns found on Korean temples.

The exterior walls are painted a vibrant red-orange but it’s the murals depicting immigrant life in Los Angeles that truly connect with the people. Inside, it is undoubtedly a genuine Mexican restaurant. On any given night, the place is packed. Noise from the crowd, combined with the live music that plays nightly, fills the air. This is a place to eat, drink, socialize, sing, and have fun while doing all of it.

Fernando and his wife, Maria Monterrubio, spent 18 years serving the Los Angeles community and raising their three children. At the height of success, the Lopez family owned and operated six restaurants. The family business allowed them to provide a college education for all three of their kids, preparing them to one day take over and perhaps even take the business beyond their father’s original vision.

The economic downturn and other factors forced Mr. Lopez to contract the business and refocus his efforts—and those of his children—on Guelaguetza. Today, Fernando Jr., Paulina, and Bricia Lopez run the restaurant. The music continues to play, Angelenos still love it, and the food and drinks are superb. If you’re outside of Los Angeles, you can even buy the family’s highly acclaimed mole through the restaurant’s website—it’s Guelaguetza for the digital age.

Fernando Lopez came to Los Angeles with a dream. He worked tirelessly to reach his goals and create a better life for he and his family. The road was not always easy but the Lopez family persevered. Guelaguetza is a staple of Los Angeles, a mark of Angeleno unity, and a symbol of the American Dream.

Processing…
Success! You're on the list.
Whoops! There was an error and we couldn't process your subscription. Please reload the page and try again.