A Painful Commute Through Los Angeles 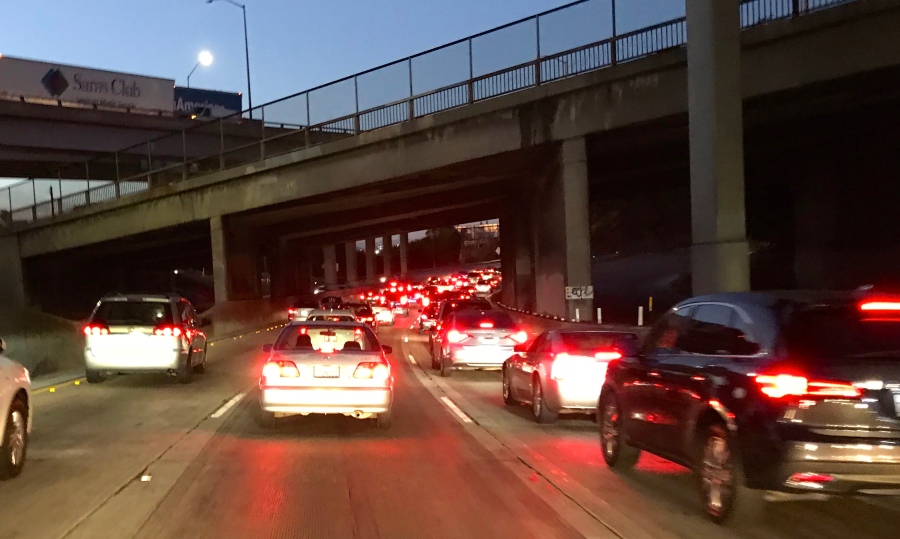 I sat on the Five watching the temporary dividers, empty construction trucks, and mounds of gravel off to the side as my car inched forward. I slowly moved north out of Orange County wishing I were anywhere else but on the freeway.

“The Five is never the answer.” This has become my motto over the years of driving the freeways and streets of Los Angeles. Unfortunately, the Five freeway is one that is sometimes inevitable. Surface streets are nightmarish in the suburban landscape that stretches from Lakewood to Cerritos. It’s simply easier to join the masses and convince myself the crawl is normal traffic in L.A.

My energy drained away with each passing minute. It became difficult to keep my eyes open despite an open moon roof and a stereo on full blast. The cars moved slower and the radio became distant. I was singing along but unable to keep up with the song. It was as if my soul was pulling away from my body.

This has been my typical route for ten years: Echo Park to Buena Park in the morning and back to EP in the evening. The commute has taken a toll on my body and mind. I stare at the brake lights ahead and the headlights to my left and I wander off. With partially open eyes I dream of sending my daughters to college, eventually affording a house in L.A., traveling, and working from the comfort of my home without ever sitting on the Five.

As the dreams meander through the roads of my brain, the red shimmer of brake lights ahead startles me and I slam the brakes. The car comes to a halt with two car lengths ahead of me. I look up at the green sign overhead and realize I’m about to reach my destination. Orange County is now a fuzzy memory of a day left in the past.

I walk in the door with my youngest daughter in my arms and greet my oldest daughter as she watches TV in the living room. It’s almost 7 PM and this is the first time I’ve seen her awake. My wife is still at work and won’t be home for almost two hours. I have just enough time to make dinner, eat, get the baby to bed, and crash alongside her. Then it’s time to get on back on the freeway. I can’t help but think it’s time to make changes.

Much like the construction currently changing the bandwidth and shape of the Five, I can’t change overnight. I can slowly build my new route alongside the existing freeway. I can attend work every day and take a few hours to try something else. As time passes, the alternate route may begin taking shape and I can use it as a partial way home. If the new road begins to save time and stress, it’s time to begin shifting towards that road. There is no doubt that it will take some time but perhaps in five years—when I turn 42—I can finally eliminate my commute and exit the Five one last time.