In the aftermath of the sports world’s reaction to President Donald Trump’s opinions on kneeling during the national anthem, I would like to post some words I wrote the afternoon of January 30, 2017. In the midst of this latest chapter of Trump’s tenure, it’s important to realize the events are about something much bigger than a Donald Trump tweet or speech. They are peaceful protests to bring attention to deep-seeded racism and police brutality still happening in the United States today. The First Amendment of our Constitution grants us the right to peaceful protest. Threatening Americans for exercising this right is the real insult to the flag and the nation. 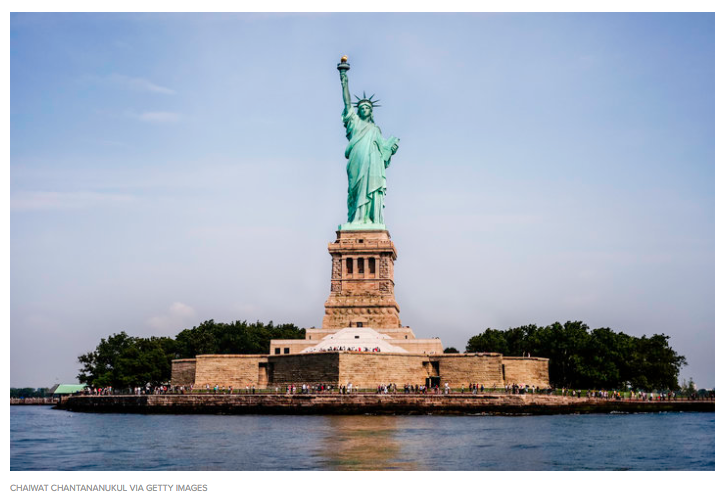 “Give me your tired, your poor, your huddled masses yearning to breathe free, the wretched refuse of your teeming shore. Send these, the homeless, tempest-tossed to me, I lift my lamp beside the golden door!”

These are the words I think of when the Statue of Liberty is mentioned. For many years, it was that statue that welcomed people to the country where dreams came true if you were willing to work for them. While the statue was not visible to the families that came from the southern borders, the significance of the statue was present nonetheless.

My mother believed in this message without ever seeing the plaque for herself. She knew I’d have a better future here than in her native land of El Salvador. She abandoned everything she knew to grant me that future. I’m eternally thankful for the choice she made and I strive daily to seize every opportunity.

Over the last days, the words that have made this country successful have been ignored. Our new president has carelessly signed orders designed specifically to alienate, persecute, or simply discriminate people different from the majority. Each pen stroke of his excessive signature cuts like a dagger through the values of America. In the span of one week he has suppressed the media, bullied corporations into doing business his way, alienated allies, singled out a religion as not worthy of being American, and even ignored an entire branch of government.

The United States Constitution is the most sacred document this country has ever created. It must be respected and followed by all who call the country their home. It is not to be bent or selectively followed to benefit only a select few.

This time is crucial and will be written about in future history books as a time in which the United States democracy was tested. It is imperative for people to remain vigilant and outspoken as the current government strives to erase the values of democracy while hiding behind hateful, divisive rhetoric. If the people are silenced now, the United States will become the next failed governmental and economical experiment. I do not want future generations to read about the United States along with World War II Germany and the Soviet Union. The voice of the people must prevail.

This is the time for all to come together as one. This is the time to set aside political parties, gender, race, social class, and whatever other factors may separate us from each other. The factor that unifies us is the Constitution. We must not allow the country to fall like so many others at the hands of one man using fear, hatred, and scapegoating in order to rise to ultimate power.

The days of recording with limited channels and editing on tape. #vintagegear #recording
A few of the murals we came across this morning. #mural #losangeles #streetart
It was a great Father’s Day and this is how I get to close it out. Thanks to all my beautiful girls at home for making it a special day. #girldad #brew #stonebrewing #cheers #happydad
While not completely open, it was good to be able to spend time at Echo Park again after the city shut it down. The Munchkin and her cousin had a blast running around all afternoon. There were paleteros passing through like any other day in a Los Angeles park. The next day, LAPD showed up to harass and kick out vendors. #echoparklake #losangeles
Carne asada, Gentleman Jack, and Pulp Fiction Sunday night because I don’t have to worry about waking up at 4 am on a Monday. #cheers
Take it from Kirby, keep your hands clean. I always found it a little troubling that COVID was the trigger that made many start this habit. #stayhealthy #washyourhands