Damaged Petals: Me Against The World 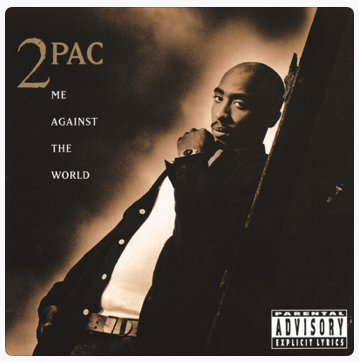 The year 1994 was the most chaotic in Pac’s public life. On the plus side, he was already one of the biggest rappers of the era. His starring role in Above The Rim elevated his notoriety. Tupac the artist had just as many layers as Tupac the person. The artist was enjoying a spectacular ride to the top.

Shakur’s personal life was in direct juxtaposition to his professional one. Throughout his life, he’d been in numerous legal battles but there were two events that shaped not only 1994, but the remaining years of his life.

In late 1993, Shakur was involved in a shooting with two off-duty police officers. He was initially charged with aggravated assault. The case was dropped in 1994 when the court learned the officers were intoxicated and had incited the altercation. Witness testimony also revealed one of the officers threatened Shakur with a gun stolen from an evidence locker. He took on the law and won. The entire incident elevated his hero status in the streets.

The case that did go to trial and kept Shakur in an unwanted spotlight throughout 1994 was the sexual assault case that allegedly took place at the Parker Meridian hotel in New York. Right up to his death, Shakur insisted all sexual acts had been consensual. The prosecution and the victim argued to the contrary. He was found guilty of the lesser of two charges on December 1st, 1994.

Me Against The World was recorded in the midst of this personal turmoil. There is no doubt the stress and emotion of the year led to the most introspective collective work of his career. The album was released March 14,1995. At the time of its release, Shakur was already serving time after being sentenced to a minimum of 1 1/2 years in prison.

Tupac was a complicated individual and like many artists before him and since, it was not always easy to spot the real person. In Me Against The World, Shakur did away with all reservations and exposed himself like never before.

The album jumps right into his controversial life by playing a compilation of various news reports documenting the man’s troubles. That intro leads into “If I Die 2Nite,” which delves into Shakur’s hectic lifestyle and poor beginnings.

That powerful start then takes us to the album’s titular track. At the end of the song, Pac gives us this message: “I know it seems hard sometimes but remember one thing. Through every dark night, there’s a bright day after that. So no matter how hard it get, stick your chest out, keep your head up, and handle it.”

From there, we are treated to one of his most powerful anthems, “So Many Tears.” A 4-verse microcosm of both the album and Pac’s life, the song expresses Shakur’s deepest feelings of his childhood, “Back in elementary, I thrived on misery. Left me alone, I grew up amongst a dyin’ breed;” those he’s lost; the family he wished he could have, “I’ve been really wantin’ babies so I could see a part of me that wasn’t always shady;” and the inevitable untimely end to a life that seems to bring such little happiness.

Two tracks later, “Young Niggaz” speaks to the youth with a harsh tone, “You could be a fuckin’ accountant, not a dope dealer. Fuck around and you pimpin’ out here when you could be a lawyer. Niggas gotta get they priorities straight.” Shakur always wanted to be a positive influence but he understood kids were just as stubborn and unwilling to listen to advice as he had been in his youth. The only way to reach them was to speak from the heart and with brutal experience. If only one person changed their life at the time they heard this song, Pac made a difference.

The midway point of the album is arguably the most personal song ever written by the self-nicknamed Realest. To this day, it’s impossible to hear “Dear Mama” and not be overcome by emotion when he proclaims, “When I was low you were there for me. You never left me alone ‘cause you cared for me. I could see you coming home after work late. You in the kitchen tryin’ to fix us a hot plate. Just workin’ with the scraps you was given. And mama made miracles every Thanksgiving.” The vulnerability he expresses in the song is seldom seen in a genre where it’s expected for artists to exude grandiosity and a sense of being untouchable. This willingness to stand defenseless made Shakur a stronger person in the eyes of his listeners.

Shakur reflects on the many aspects of his life throughout the album. “Temptations” can be considered a sequel to “I Get Around” on the surface if not for the confession that he struggles to remain loyal. “Heavy In The Game” is a Thug style 2Pac song aimed at the streets. “Lord Knows” professes how getting high is the only way to stave off suicide, “Try to calm me down, I ain’t givin’ up. I’m gettin’ lost in the weed, man, gettin’ high. Livin’ every day like I’m gonna die. I smoke a blunt to take the pain out. And if I wasn’t high, I’d probably try to blow my brains out.”

The soul bearing continues in “It Ain’t Easy” and “Fuck The World,” as Shakur questions how his life is leading to misery, prison, or death. “Can U Get Away” provides us a picture of female physical and mental abuse from a slightly different perspective and “Old School” makes time to celebrate the music and moments of Shakur’s childhood that helped mold him. It’s a joyous track that shows us just how much music played a part in his youth. Through the song, we understand many childhood memories are connected to music—a completely relatable sentiment.

The concluding track features The Outlawz, who were then still known as Dramcydal. “Outlaw” has always felt like a bonus track. The real culmination of Me Against The World is “Death Around the Corner.” This is a foreboding piece in which Shakur lays out the various circumstances that force him to believe he will die while still a young man, “If they bury me, bury me as a G, Nigga. No need to worry, I expect retaliation in a hurry. I see death around the corner any day.” This prophecy would become real the following year.

Me Against The World marks the end of a period for Tupac Shakur as an artist. All of his albums were remarkable in their own ways but Me Against The World stands alone. It’s an album filled with pain and joy, mourning and celebration, hate and love. It is a representation of every person’s inner struggles and remains Tupac Shakur’s most personal and passionate work.